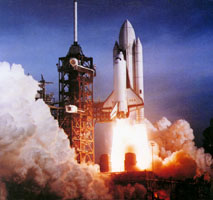 January 28, 1986 is one of those "where were you when?" days, the loss of innocence type days when we realized space travel did indeed involve risk and danger. We had been lulled into a false sense of bravado after watching the many successful launches and returns.
That day was cold, so cold in fact, school was canceled here in western North Carolina and for that I'm thankful. I had every intention of having my class sit in front of the television to watch the Challenger shuttle launch. After all, this was the much anticipated teacher in space launch and my students were excited, pumped up, ready to participate in the venture. I remember the shock, but I remember most of all seeing on television the faces and expressions of the children watching the disaster unfold.

Twenty-five years later, I wonder what those very children are telling their own children about that day. Do their eyes well up with tears? Do they emphasize the tragedy or do they take the opportunity to teach about courage and daring?

Pilot Mountain School closed in 1973, long before Christa McAuliffe applied to NASA. Travel into space had begun, though, and the children of the 1960's have space stories of their own to tell their children. They sat in front of the television with their classes, too, but not like today with the wide screen, remote control gadgets or even like the 1986 television on a cart (one per hall) and cable outlet plug in the wall.

The Pilot Mountain children watched in the auditorium on the television the principal brought from home that morning, five classes, one tv, on the stage, rabbit ears with aluminum foil wrapped around the ends for better reception. They watched the Gemini launches and they watched the Apollo splashdowns and worried with the entire world if the helicopters would arrive to rescue the astronauts before they sank to the bottom of the ocean.

The science fiction of their age is becoming the reality of this age. Few classes spend time in front of the computer screens watching the live space shuttle launches and returns. Space travel is routine, nothing worthy of precious class time. The connection is gone. What will these children tell their children in twenty-five years?

Gretchen
Posted by Gretchen Griffith at 8:27 AM

Email ThisBlogThis!Share to TwitterShare to FacebookShare to Pinterest
Labels: 1960's