The Carswell Book, Part One

A book has to start somewhere, so why not at the beginning, unless the author takes a little liberty and does a bit of finagling. That would be me. I start this biography at the peak of Dr. Jane Carswell's career, after she has been acclaimed as the "1984 National Family Physician of the Year," and when she is speaking to the classes at the medical school she once attended. "Family medicine keeps one humble," she said. "Often you as a physician can do very little to help the patients, but they still give you their trust and share their joys and sorrows with you." She said it, and she believed it.

That belief came not only from her upbringing by two parents who devoted their lives to serving God, but also from her heritage and the long line of steadfast family members who helped make Jane Carswell who she was. So there. Chapter One, Heritage. Her mother's family called Williamsburg, Virginia home. Actually, they called the Peyton Randolph House home, where her great uncle, the mayor of Williamsburg, along with her aunt raised Madeline, Jane's mother, after her own mother was killed in a farm accident. It is now one of the restored houses open to the public for viewing. As her mother walked through the house on tour with Jane years later, she talked about living there before the village became the remarkable institution it now is. That alone is a book in itself.

Chapter Two, Childhood. Here's where the family values were instilled in Jane. She was born in 1932, so that put her square into the Great Depression as a baby, and into the homefront of World War II as a growing child. This chapter is mostly Jane's own recollections of growing up in the sandhills of North Carolina, written in speeches she gave at various church homecomings.

Chapter Three, College. This is the only place in the entire book (beyond the preface) that I inserted something personal as a homage to being a fourth grade teacher. I'll let you seek out that on your own, but I will say that Jane attended Flora Macdonald College and wow, the stories from her experiences there! Strict Presbyterian Women's College. Dress code. Decorum code. Korean War era near the Fort Bragg military base. Add those together and there's a story. One of her required physical education classes was the Highland Fling, and that's part of the story.
Chapter Four, University. She was female. She could not enroll in UNC Chapel Hill until her junior year, and even then she was in the minority, as at the Medical College of Virginia where she was one of five females in her class of a hundred. She learned what discrimination was all about.

Chapter Five, Kentucky. Her first job, that lasted only a year, but that's a different story. Bloody Harlan, Kentucky. As I wrote this chapter I couldn't help but sing Tennessee Ernie Ford's song that I grew up with, "Sixteen Tons." She didn't live in the community where that song originated, but the circumstances were the same where she did live.

Chapter Six, The Practice. She found her way to Lenoir, North Carolina and established herself as a physician of the highest degree. 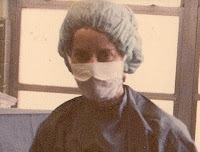 I can't wait for you to read these chapters to get to know the good doctor.