Once upon a time there was a donkey named Jake minding his own donkey business in the field, chomping on hay, warding off coyotes, braying his opinions every now and then, when what to his enormous long ears would he hear but the clank and the clatter of the horse trailer being moved.

Being the curious donkey he was, he trotted over to investigate this noise. His owner lured him closer with the largest, most delicious looking carrot his eyes had ever beheld, so he followed the bait up the waiting ramp. A slam behind him mattered not. His attention was on the treat. The trailer beneath him moved. He chomped on. The trailer stopped. The back opened and he unloaded, fully expecting more food, an apple or two for his trouble.

A man and a woman approached. He lifted her onto Jake's back and tugged on the reins. Jake obediently followed…and followed…and followed. Over and over and over again that night they went down the same path. Crowds watched them and expressed delight. He ate his treats and his belly filled. When the evening ended, Jake loaded back onto the trailer and returned to his pasture. 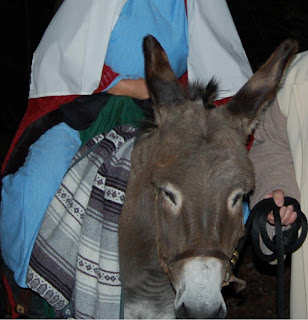 A few days later, the same strange event occurred again. He was whisked away and brought back, but this time the thrill faded. “No more,” he vowed in his jackass of a brain.

The next afternoon, when he heard the clink and the clatter of the horse trailer, he ran the other way. He absconded. He didn’t know the word, but he lived the definition, to depart secretly and hide oneself. Absconded.

The owner searched and searched to no avail. Text number one to the pageant director: We can’t find Jake anywhere.

No worries. The afternoon was still young.

Mary and Joseph walked that night.

When the trailer clanked its presence the next night, final performance by the way, Jake had returned. He was ready. The lure of the snacks beckoned him once again and the prodigal donkey came back. He acted his part as if nothing had ever happened and charmed the audience. When it was over and he received the loving pats from actors along the trail, Jake returned to his pasture and to doing what donkeys do to keep warm in the cold, dark days of winter.

There’s bound to be a moral to this story. If I were Aesop, I’d come up with one for sure.

But I can’t. For you see, I was the pageant director on the receiving end of the “We can’t find Jake anywhere” text. I was the one who fretted over that absconding donkey knowing the disappointment of the children in the audience expecting to see a furry creature in the scene. We made do, although he was truly missed. 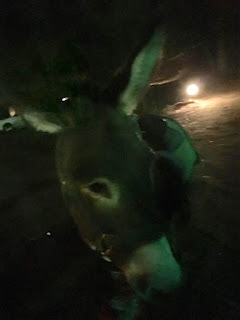 Strange thing, though. I wasn’t mad at that stubborn donkey who was acting like an ass acts. I was jealous. He did what I wish I could do sometimes when things don’t go my way. He took off for the hills. He didn’t have the ability or the desire to know what he was doing to the rest of us in the pageant. He just wanted to escape. He didn’t have the capacity or the humanity to realize how much his presence meant to us. He just wanted away from the madness.

The real bottom line of this story is that Jake came back. I’ll never know what was going through his mind that led to his decision to return, but I can guess. I think he took that time to renew himself. He needed a break from the spinning world. We all do.

Returning is a courageous but necessary act. If any of you want to pull a Jake, I say go for it in your own time…after you tell someone …after you prepare. Take a breather for an hour or two, but know you are needed. Refresh. Come back strong.

Posted by Gretchen Griffith at 9:03 AM