A string of forest fires across our western North Carolina mountains struck fear and dread into our hearts last fall. The worst my house got was the smell of burning wood, but my heart ached for those in the direct path of destruction. Fires don't discriminate. They choose whatever is before them. Only the forest service firefighters stood between the all consuming wall of fire and the next house on the list, or the next nest on the list. Squirrels have homes in the forest, too. And deer. And foxes.

Walking outside during one particular week was not only smelly, but also dangerous for those with lung issues. My eyes burned as well, tearing up often and not necessarily in sympathy for the losses. I had written about these South Mountains in my Lesson's Learned book, so I felt a kinship to this land abundant with stories for a story catcher to catch.

Finally a week of rain stopped the onslaught and the nearest fire to me was pronounced contained. So I forgot all about it, as people often do about tragedies when they aren't directly affected. Until last week.

I had a chance to join up with the Foothills Nature Conservancy. and hike their property bordering the South Mountain State Park that just so happened to back last fall's Chestnut Ridge fire line.

The hike was three and a half miles uphill all the way. Well, it seemed like that anyway. The plot of land where we hiked followed the watershed up the side of the mountain, although we hiked along an old logging road, the very one firefighters followed to battle the fire. Where we were was in the back-lit area, the part that was intentionally set to burn out any fuel that the encroaching fire would need. 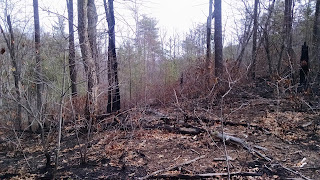 What I saw was a bit of burnt wood and a whole lot of spring trying to reclaim its rightful place. Things had been purified by the fire. The brush had burned away leaving the sturdy plants there.

Bark on healthy trees is thick enough to withstand a tremendous amount of burn, the man explained.  I could see that for myself. The crown in the trees were beginning to waken after their winter dormancy. Green will soon replace the charcoal. Life was returning, of that I felt assured.

Except for one thing. Other than our footfalls and acorn crunching, there was no noise. None. No birds chirping. No squirrels scampering up the sides of oak trees. No lizards scurrying away. Nothing, not even the cry of a hawk or a crow in the distance. When we stood still, we stood absolutely still. That's an odd kind of silence that is noticeable to those of us from modern civilization not accustomed to dead silence. Dead. Silence.

Maybe on top of that hill my brain felt reassured that life would go on, but my heart ached for the creatures that were displaced. Come back, come back, I wanted to shout. It's over. It's gone. The ground has been purified for you and it's better than ever. It is safe now. Bring back your children. There are plenty of untouched acorns waiting for a woodsy feast.

It's all part of nature's plan. Life goes on.