The first few years I taught fourth grade my classroom was in an old 1925 building...no air conditioning...bat drippings oozing down the walls from cracks in the super high ceiling...wooden floors with so many years of summer wax job buildups, a fire would have spread instantaneously...ancient radiators that hissed steam...windows above the radiators that spanned the rest of the height to the ceiling...gravel (muddy) parking lot for teachers.

While building maintenance was hard to keep up to standard, beautification projects kept a certain air of dignity about the campus. I don't remember all that many flowers except for a string of bushes that bloomed gigantic white balls. The children called them snowball bushes. I looked upon them as pesky. The sarcastic teachers called them death traps. 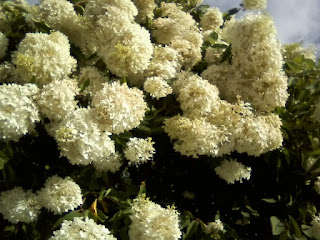 Let me explain to all of you who don't remember life in a hot classroom with no air conditioning, even before global warming reared its ugly head. Closing the windows was not an option. Lowering the shades helped some, except that often the one most needed had scrolled its way to the top of the window frame and the janitor was nowhere around with a ladder to reach the cord that pulled it back into position. Electric fans would have helped, except that the wiring along the string of classrooms on my side of the hall was tricky. If the teacher next door was showing a filmstrip, power to my plug just didn't happen. Children learned early how to turn yesterday's math worksheet into a paper fan. Teachers learned early to go over the important skills in the relative coolness of the morning.

And bees learned early that the insides of the schoolhouse offered all sorts of tasty, inviting juice remnants. Which brings me to the snowball bushes arrayed beneath the windows of my classroom and the swarms of bees doing what bees do when the flowers are at their peak. They made a bee line to these delectable snowballs, and often made a few detours in the open windows. Only one year did that cause a concern, the year of the superallergic, ten minutes to get a shot from my top desk drawer or die, student. We took this shot outside on the playground every day. We took it on field trips. For the entire year it accompanied me, unused, thank heaven. One child's beauty is another's tragedy.

This past week my husband and I traveled to Shatley Springs Restaurant  near Jefferson, North Carolina for a breakfast treat, no small treat, I might add. It's served family style and offers any and every breakfast item a southern home cook would offer, including country ham, sausage, bacon, gravy, grits, eggs, potatoes, stewed apples, biscuits and strawberry jelly. Make that homemade biscuits and homemade strawberry jam.
On the way inside we passed a noisy snowball bush. No, the bush wasn't making the noise. The bees were. Too bad this photograph I took of the bush doesn't come with sound. I'd love for you to hear it. That's the restaurant in the background, on the other side of the bush, at the end of the walk that goes directly below the bush...and the bees. My guess is that when the blooms start shedding their individual petals, the ground is as white as the winter snow. But this is summer and the tasty food and accompanying smell of fried country ham overrode my fear of noisy bees. I was not disappointed. 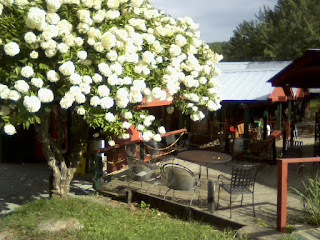 Dodging bees there at the bush brought these schoolhouse memories back. Strange how the most unexpected thoughts come from a simple morning out.

Gretchen
Posted by Gretchen Griffith at 10:41 AM