It's a weed. Around here, in the foothills of the Appalachians, it's definitely a weed. 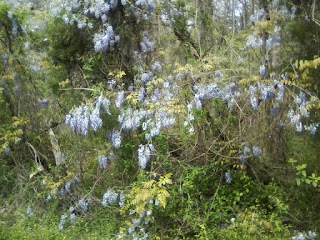 I heard about an elderly teacher with her old school values who had two groups of readers in her classroom. I'm talking way back, back when teachers typically chose cutesy names for the groups. Red Birds. Blue Birds. Sometimes the students even voted for names of their group. It didn't take long for the students to grasp which was better to be in. They might not be able to read words, but they could read realities.

Blue Birds, of course. And dare not mention the Yellow Birds.

When I was in graduate school there was a similar ranking. You were either an Orchid or you were an Onion. True story! But we were adults, not second graders growing self esteem.

But this one particular teacher had a naming system that there was no denying which ranking was better. Her two groups were the flowers and the briers. By the way, that rhymes when said with a southern mountain accent. Flowers. Briers. 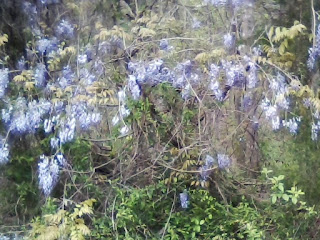 So if a child is a brier, is he (because the majority of poor readers were boys) worthy?

Look at the beauty of the wisteria as it fights for its life in the brambles.
I see beauty. I see shelter for the animals in the woods. I see friends taking cuttings of this plant beside the back country road and taking them home to root and grow their own.