I can't seem to get away from them.

I was born in a town in the Alleghenies. I went to school at Appalachian State University, can't get much more mountain than that. I live in the foothills of the Blue Ridge. My daughter lives in the shadow of Taos Mountain in New Mexico and soon I'll be sitting on her back deck sipping a cup of steamy hot tea as I watch the morning balloon launches in the Rio Grande Gorge, flat top mesas in the background. Aah!

I wrote about a school in the South Mountains in Lessons Learned: The Story of Pilot Mountain School. I wrote about a boy moving to the tree farms on the mountain slopes of North Carolina in the yet to be released but coming soon, When Christmas Seems Like Home.

Presenting my newest book! Set in the mountains, go figure.

Called to the Mountains: The Story of Jean L. Frese. 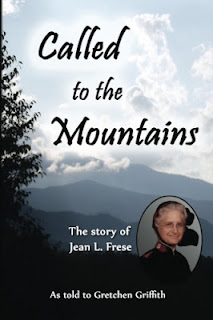 Only this time those mountains are the Smokies, the Smoky Mountains of Western North Carolina. And there on the cover is the subject of the book, Jean Frese, also known as Lorraine. What a story she had. What a witness to faith and determination.

This is her memoir, her voice. I changed very little of the recorded interview during the transcribing to writing process. She's my mother's cousin, raised by my grandmother, so I look on her as my aunt, Aunt Lorraine, despite the subtitle of the book. Her name change from Lorraine to Jean was only a small part of this faith story. It's a story of her life at the Salvation Army Mountain Mission in Shelton Laurel, North Carolina. It's a story of answering God's call, her call to the mountains.

Available now on Amazon.  Kindle version will be available later this week.

The call to the mountains runs deep in our family.

Catch of the Day,

Posted by Gretchen Griffith at 8:09 AM