Telephone times have changed since Pilot Mountain School first opened. That's an understatement if I've ever written one. Just look at how the telephone has changed in the last few years, months even.

For me, surviving without a cell phone is an impossible task, now that I know what I would be missing. The mischief makers of the past at least got a few hours before the wrath hit. Teachers today call and text parents (and the front office) from the classroom, immediate action and reaction.

The teachers at Pilot Mountain School weren't that fortunate. The one telephone was in the office. For the first few years, calling was an operator assisted activity. I found these old telephones for sale on ebay, in case you are in the market for outdate technology. Me, I've got several newer, old fashioned telephones in boxes and drawers. I don't need more. 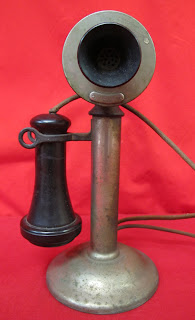 Notice, no dial, which means no dial tone. Just an operator that says, "Number please." A parent could reach the office by saying, "1071-w-1." The "w-1" indicated party line w, house one.

In the fifties, technology in the South Mountain Valley upped a notch to the dial system. Each area was assigned an exchange name, Hemlock, for south of town. HEmlock-7, again a party line, a party of twelve: The school, the principal's house, and ten others. "They weren't being nosy," the principal told me when I asked about privacy. "They were being friendly, asked how I was doing. But they always hung up when they knew the call was about school business." 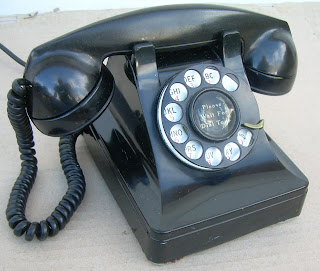 Since there was no principal in the principal's office while he was in the classroom teaching, the phone went unanswered except by an eight grade student who sat near the door of the classroom and listened for the ring. Twelve on a party line, twelve distinct rings? No one I've asked remembers, but I'd bet the farm that none of those twelve rings involved the variety of ringtones available today.

Every so often, I hear someone's ringtone that reminds me of the phone in the second picture.

Hooray for those few! They bring a memory to my mind and a smile to my face.

Gretchen
Posted by Gretchen Griffith at 7:30 AM