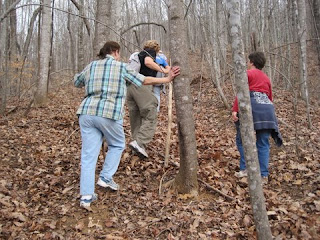 I hiked Pilot Mountain and lived to write about it. So it was only 2063 feet tall and I didn't make it all the way to the top. So the outcropping of grantie rocks stopped me in my tracks. I can walk hills, I can't scale rocks. But I still claim to have accomplished climbing Pilot Mountain. Did I go above and beyond the task of a storycatcher?

No, especially since I caught more than sore muscles on this trek. I caught stories.

Gold mining flume from the top of the mountain: east side, ten miles long going past the knoll where the schoolhouse would later be; west side, three miles long aiming toward the setting sun.

I had to come back home and rewrite chapter one!

Gretchen
Posted by Gretchen Griffith at 8:30 AM