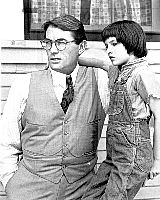 She played the role of Scout in the movie version of To Kill a Mockingbird, Mary Badham, and she spoke to a Southern Cultures Class at a high school near me. I went to her evening presentation last night more out of curiosity than anticipation. After all, what could a child star from the sixties possibly have to share? Five minutes in and I knew the answer.

Her experiences growing up in segregated Alabama to some extent paralleled those of the children at Pilot Mountain Schoolhouse, although her family had servants, “colored” women from across town. In the Pilot Mountain School district, children’s chores accomplished the same thing at no cost. Here the children worked alongside their parents, scrubbing the floors, planting the corn. There the mothers taught the girls how to wear white gloves to the department store while their maids scrubbed the floors.

But it was still the south. There were still the rules and laws and accepted ways of doing things. Daily life was separated into two parallel existences that rarely intersected. Separate water fountains. Separate sections in the movie theater. Separate schools. Separate but equal, supposedly.

Mary Badham talked about change and how it sometimes takes a crowbar to get the system moving. I’m researching the sixties now and seeing how the crowbars impacted Pilot Mountain School. How can I write a memoir of a school in the south and not include this? Oh, yes, it will be included.

Gretchen
Posted by Gretchen Griffith at 9:15 AM

Email ThisBlogThis!Share to TwitterShare to FacebookShare to Pinterest
Labels: 1960's